And progress continues on the Citiplex...
I've airbrushed the rust and grime basecoat on the floors and walls, then hairsprayed them (to enable chipping at a later stage, should I want to).   I managed to get the floors painted after the hairspray had dried. All this I managed to do in an afternoon off from work. 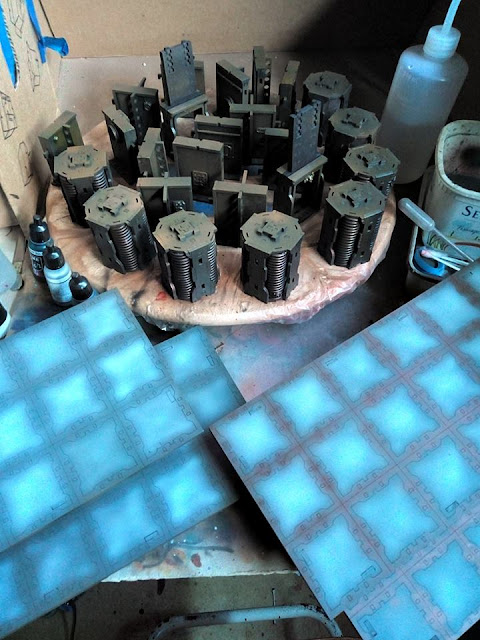 This weekend, I didn't quite get as much time as I'd liked to, but at least I managed to do the basecoat/shading for the walls and columns.
One side of each wall I painted in a tan/dirty white colour, with other side a faded, dark green. 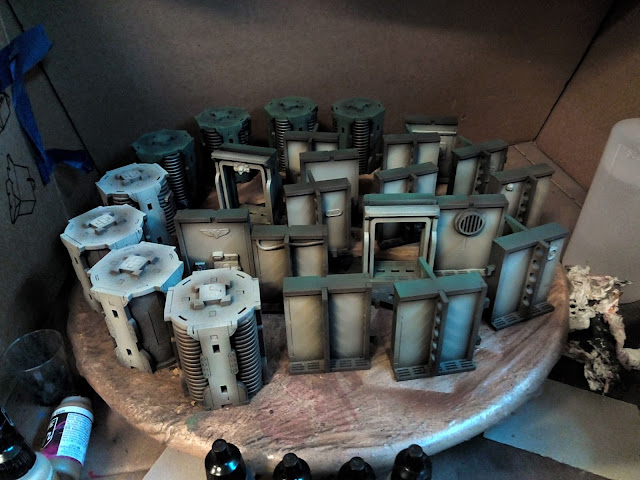 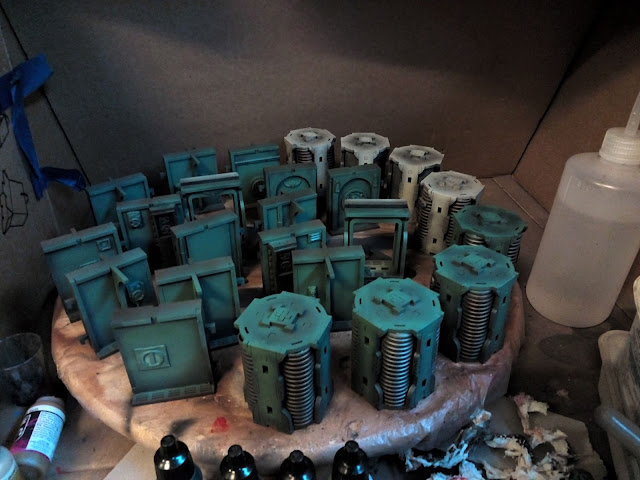 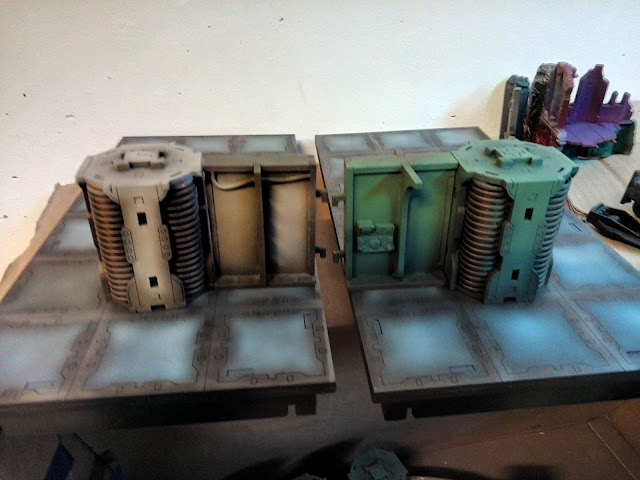 Now I need to decide if I want to add some coloured striping or other markings before I start the chipping process. Hopefully I can do this next weekend.

I've also, bit by bit, started receiving the EL-wire, battery packs and LEDs I need to start building the sections I want to incorporate lighting in. Frustratingly, the components that seem to take the longest to arrive are the spools of wire that I need to actually connect things together...

After years of not doing so, I'm really enjoying building scenery again and the airbrush just makes painting it once finished so much faster and more fun!

Today, I did the second pass of detailing on  Multiverse Gaming's Vault Builder set.
As I said before, this is only a quarter of the total amount of terrain I bought from them. I bought two Vault Builder Kiloton bundles, each containing two sets each of Vault Builder Sector Alpha and Beta.
I didn't end up adding as much as I'd thought on this second pass, for two reasons:

-One: I was afraid I'd overclutter the terrain (an odd thought seeing the new Kill Team and other terrain coming from Games Workshop, but as I said, this is supposed to be a set of multi-genre terrain).
-Two: I got impatient, I want to primer this stuff and paint it up! Having just these two sets finished has gotten me excited about the final table.

Here's how it looks before I covered it all in black primer: 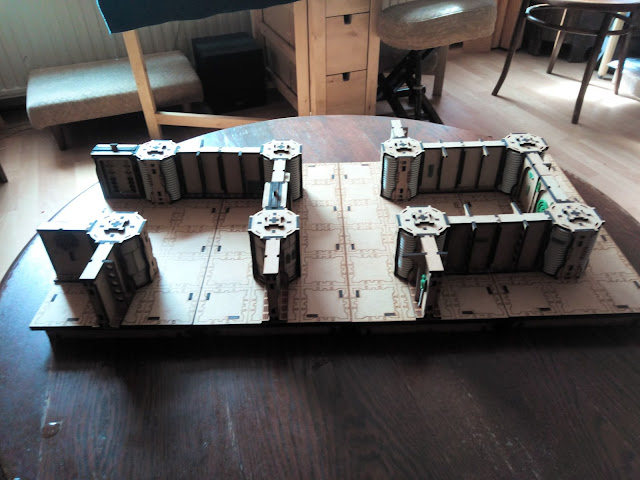 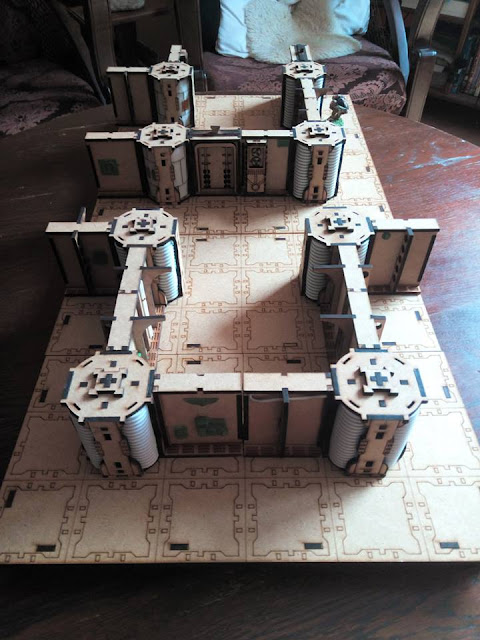 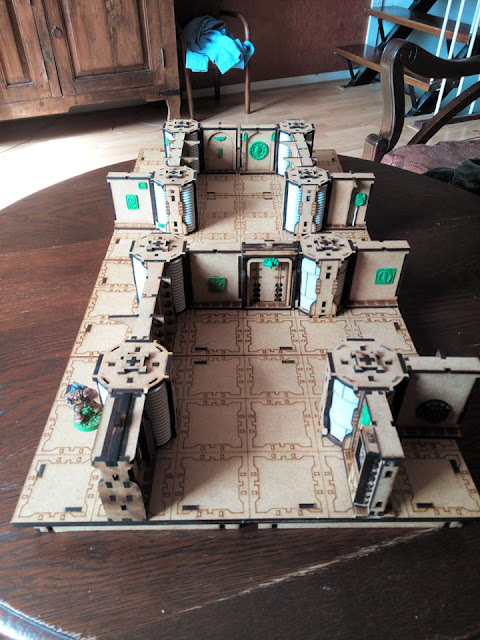 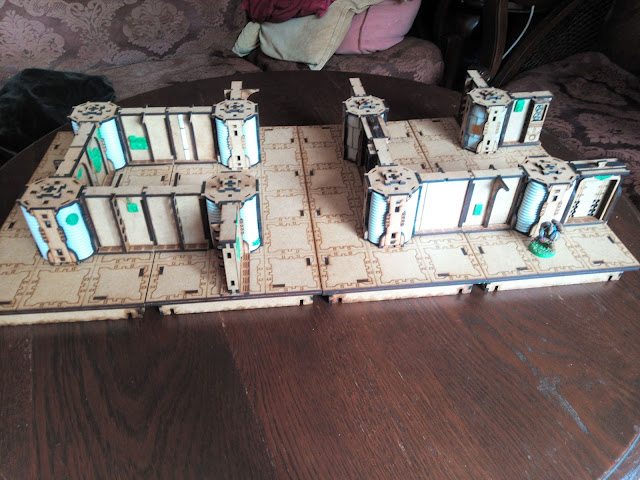 I did some things differently from the instructions given, so let's recap these. I'll also include some tips an thought on my approach:

-I replaced the cardboard inserts with 15mm diameter ribbed tubing from the local hardware store. Just slide these in, mark where to cut and glue them in once cut. Tip: Cut in the recessed parts of the ribbing and clean up your cuts so everything looks as neat as possible. When drying, wrap the columns in rubber bands so the tubing gets compressed into place. (I'll see if I can get some step by step pictures the next time I build a few more columns)

-I cut the tabs off the wall bases, so the components all stay modular.  If you built them according to the instructions, unless I'm mistaken, either everything locks together permanently, or you end up with walls standing on top of separate bases. All the items in the above picture can be separated. I did it for this set, but for the next set(s) I build I'm considering making a few double width walls. In the end I may end up building a few tiles with columns and /or walls permantly attached, in order to integrate lighting and hide the battery pack under the floors.
Tip: The tabs I cut off from the wall bases, I glued one of them onto the top of each door. This makes them easier to grab and pull out of their frames.

-I added Green Stuff (modelling putty) details. I made these by taking impressions from interesting details/elements from various unbuilt/semi-build sci-fi kits I own. (Mostly GW terrain and models, these walls have details glued on them taken from, among others, the new Mechanicus terrain, classic Necromunda bulkheads, even a Space Marine drop pod.) For the molds I used Oyumaru (a thermoplastic re-useable mold material), but you could also use Green Stuff to make the impression, just make sure you lubricate the surface enough, so the mold will come loose once cured!

-Extra details were added with parts from my scratch-building stockpile: plastic rod and guitar string pipes and cables. The retainer clips for these were cut from metal sauce/puree tubes (cut them open, wash them thorougly and flatten them out.), as was a patch panel on one of the columns. If you have a sturdy enough paper/card corrugator tool, you can also use the sturdier puree tube metal to make corrugated roofing panels.

-On one of the panels (fourth picture, lower right corner, 2 squares left from the space marine) you can just make out a large white panel. This isn't plasticcard but steel tape. The plan to add such panels here and there so I can attach setting-specific items to the walls with magnets or magnetic tape.  I've yet to build any add-ons but I'm thinking of a gothic shrine for 40K/Necromunda, a laser-cut billboard or sign for Cyberpunk, and maybe a framed poster or something for Post-Apocalypse games.
Here's a close up of the steel tape, as well as some sryrene tubing: 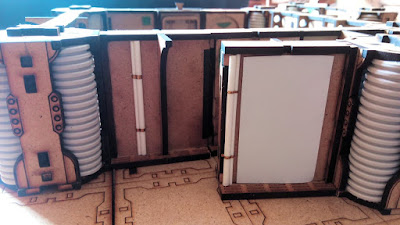 If you are ready to start priming your MDF terrain, just get a cheap can of matt black spray paint from the local DIY or hobby store. MDF soaks up a LOT of paint, and it would be a shame to use an expensive can of hobby primer for that!
TIP: When building the walls, have a spare lenght of MDF (from the frame the walls came from) on hand to "wiggle" the side walls to the right distance throught the connector slots. Otherwise you might find that the connectors don't quite fit into the slots, as the sides of the wall are too close together. Once again, maybe this is clearer when I take some pictures during the next assembly session.

As to why I chose Multiverse Terrain's offerings over other brands of Necromunda compatible walls? One is price, you get a lot of terrain for your money, especially considering that other companies don't offer the floorboards as part of their sets. The second is the sparsity of detail, as this means I have lots of room to add my own details and to modify the appearance of the walls. This is important to me, as I am at heart a scratch-builder, I want things to look thoroughly my own. The Multiverse walls allow me to do this without significant modification of the parts/building sequence.
Future purchase plans include the connector clips, as I forgot to order those this time around, as well as an extra 30x30cm of floorboards, to give me enough tiles to fill a complete 90x90cm/3'x3' Necromunda gaming table. Plus, Multiverse Gaming has announced more walls, sets and other items for the Vault Builder range, so I expect to get a few of those as well.

Currently the primer is curing in the garage, hopefully I can fire up the airbrush and at least do the basecoats next weekend... 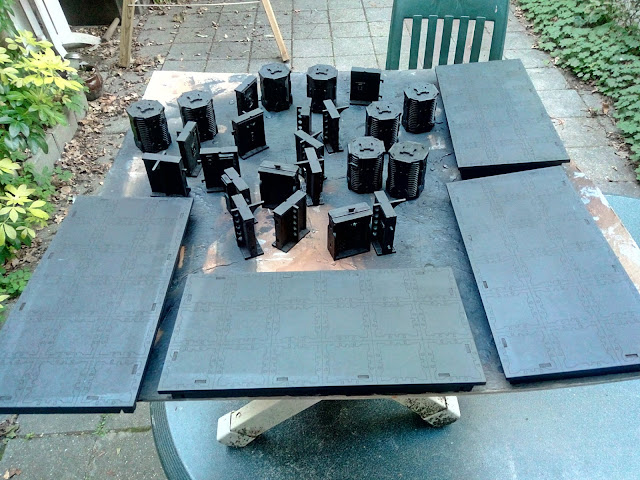 A derelict Citiplex (for various games)

About two weeks ago, I  received my double set of Multiverse Gaming's Vault Builder set.
While the past weeks have been busy, I did manage to assemble the core structure...of one half of one of the two sets. There is a lot in there! 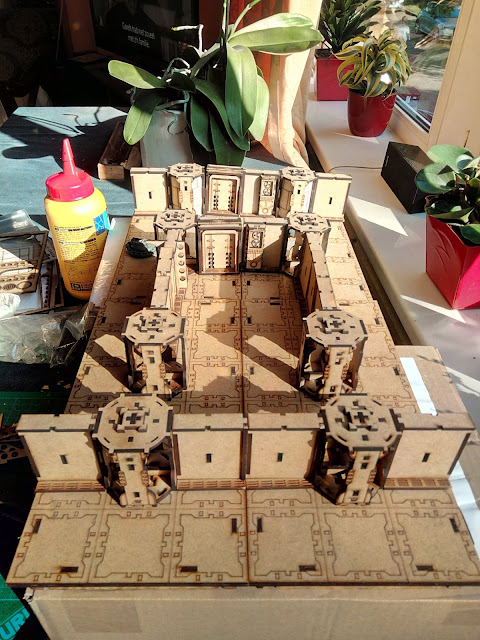 I already knew I wasn't going to build them as intended by its designer(s). Originally because I would be using it for Necromunda Zone Mortalis games, meaning I would 40K it up. But, with the trailer of Cyberpunk 2077 being released, Osprey's Cyberpunk skirmish rules on the horizon and a general interest in post-apocalyptic gaming. the plan morphed into something a bit more multi-genre.
So now my challenge has become to build it in a way that is sufficiently generic, but also has enough setting-specific detailing to be useable and visually pleasing in several genres, without being too visually jarring in any of them...
I do like to make it easy on myself. :D

One of the things I wanted to differently are the pillars that come in the set. Originally, these have cardboard inserts that you have to bend into a curve to fit into the pillars. The way these are lasercut, and grain of the cardboard means these do not bend cleanly enough for my liking.
But I think I've found a solution by replacing them with ribbed plastic tubing.
I have a second idea for making one of the pillars, but I need to get some longer length of wire: 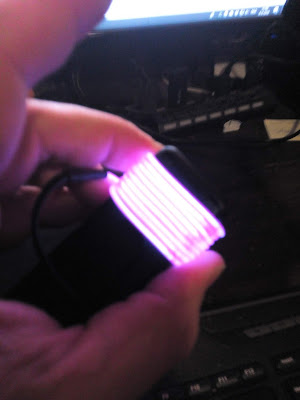 Today, I spent some time on the first pass of greebling them up. I made some oyumaru molds of some interesting details from various (GW) vehicle and terrain kits. Earlier this week, I made some casts from them. Which I started glueing into place today: 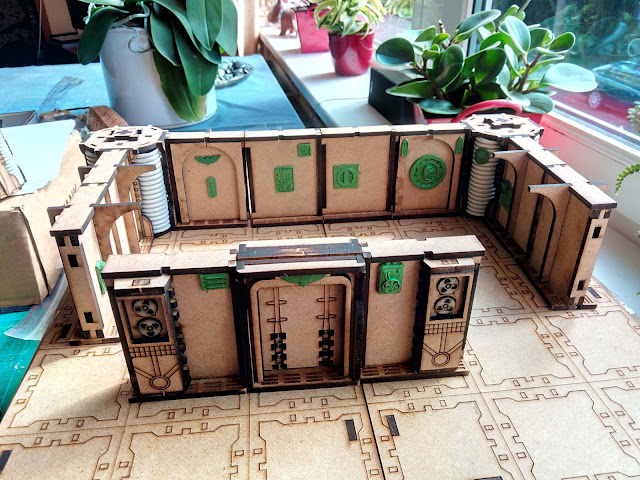 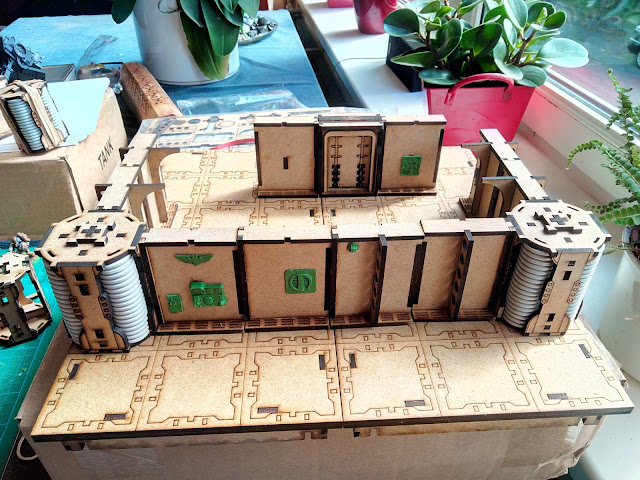 See you all next time!
Gepost door Modhail op 15:05 3 opmerkingen:

This blog may from occasionally feature content from Games Workshop, so this is in order:

This web site is completely unofficial and in no way endorsed by Games Workshop Limited.