We had another game of Gaslands tonight.

I took the opportunity to put all my WIP desert terrain on the table and pad it a bit with some of my old Gorkamorka terrain pieces. It worked and played well!
The game was very entertaining tonight, as it ended in total annihilation of all participants: 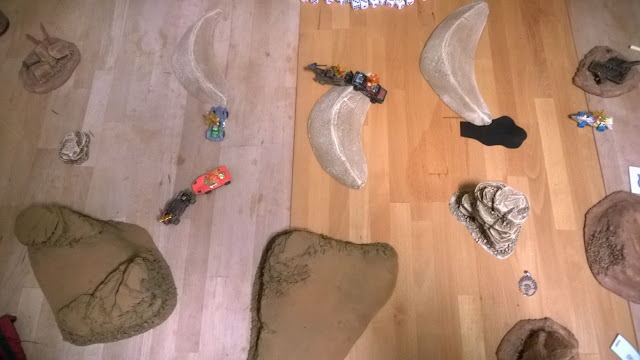 The end came when the final two surviving cars each rode up opposite sides of the same dune ridge, and rammed each other on its peak. One car was destroyed, but it was loaded with missiles, oil canisters and molotovs. Naturally it promptly exploded, totally shredding the other car!
We all had a good laugh about that one!

This weekend has been a busy one!

Replaced my son's bed. He had a creaky, wobbly metal loft bed and that has been disassembled and brought to the skip. He now has a nice and sturdy wooden bed, again loft model so he can have his desk underneath.

I also made some nice progress on the two rocky hills for Gaslands/WWII Afrika. I fixed the damage/thin spots on the filler layer and glued on the rocks and sand: 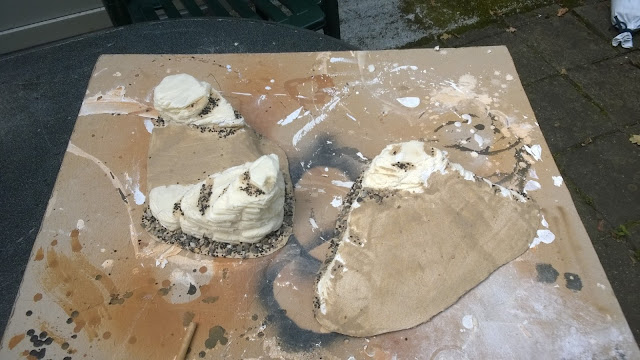 After that I sealed and primed them with two coats of a slightly watered down mix of PVA and black paint: 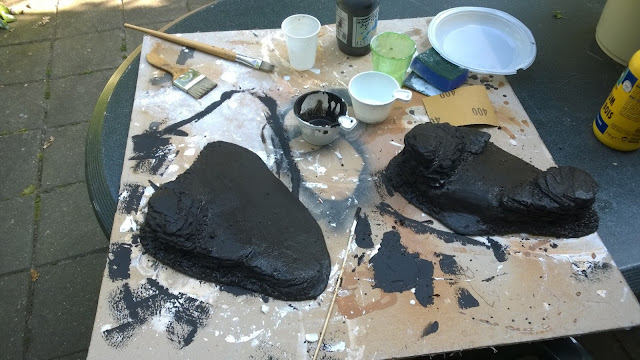 And at that point I ran into some problems:
My brown paint for this terrain has almost run out.  I couldn't finish basecoating the hills this sunday. And it's a bottle of craft paint I bought nearly a decade ago (2009) and I have no idea if the local arts and crafts store(s) still sell it! Now I may need to find a similarly tinted alternative. Sadly the local arts and craft shops are only open when I'm at work. If that hiccup hadn't occurred I might have gotten these hills painted. Oh well, no deadline, no worries. Though I would have liked to have them available for our game this Thursday.

As a diversion during drying time for the paint layers, I dug out my boxes of scenery materials with the intent of going through them to find materials and ideas for Necromunda, as I'm getting psyched to build terrain for that. This is my stash, minus specialist materials like XPS, foamboard, mdf and plaster and filler and such: 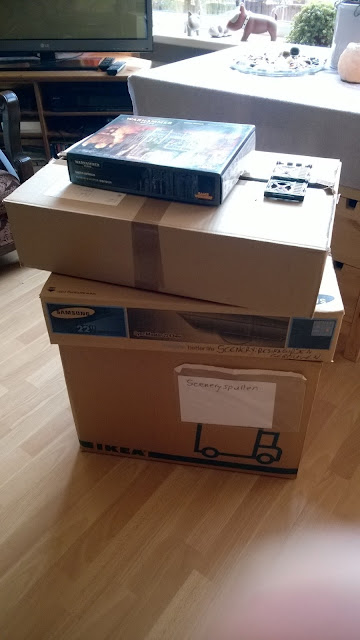 Sadly, piling this stack from the garage to the living room was I got to do this weekend. The problems with the paint for the terrain (exacerbated by my overthinning the paint in attempt to stretch it to at least finish these hills) cost me more time than I thought. As wel as my back and shoulders being knackered and sore from stress and poor seating at work (which luckily will soon be a past thing), meant I had to opt for having the occasional lie down on the couch, instead of maniacally rummaging through these boxes.
Oh, well, there is always next weekend, or the weekend after that. Necromunda won't return until November.

Speaking of work related aches, todat the boss dropped a little bomb: Originally the project I'm currently working in was supposed to last until October 1st, with maybe the chance of another extension. Today we got the news that the project will terminate sooner, to be precise: coming friday! As of  Monday, my job will cease to exist. Some choice words were quietly muttered, naturally. Of course this didn't help the aforementioned back aches.... It means I spent most of the evening applying for unemployment benefits (hoping I don't need them, but better safe than sorry) and frantically sending out more job applications. It also meant that today me and my teammates were repeatedly encountering the following error: 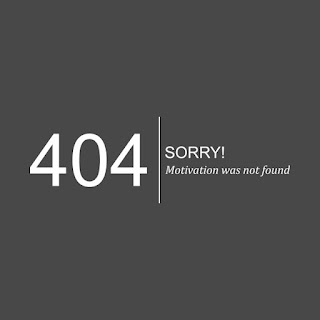 So, my goal for the coming week is ride out the work week with my head and professionalism held high, try and not let the dour mood at work infect my current hobby drive and good mood at home and find a new job as fast as I can. Wish me luck!

See you next time!

As I said, I haven't been able to access my full hobby toolkit these past few weeks. That doesn't mean I've been idle. I packed my painting kit to take along with me. And with it I managed to paint the seven Plague Marines from the Dark Imperium kit: 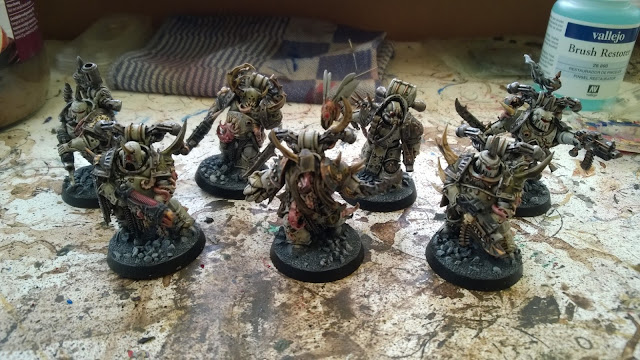 This is the first time I managed to paint and complete miniatures from a 40K starter set in the same year as I purchased it! Shocking, isn't it?
I've chosen colours close to the original Death Guard scheme, but all icky and gross. :D
Now all that's left to for this is the three characters, the Foetid Bloat Drone...oh, and 20 Plaguewalkers! After that, no more Death Guard, a nice, tidy, open and close project. No pressure, no demands, just the enjoyment of painting them.

While I was away I visited a local thriftstore and claimed these two for Gaslands: 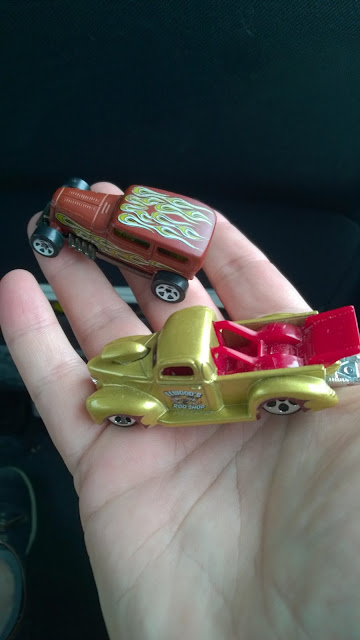 Great, aren't they? I think the pickup in the front will become a so-called Claw Car, armed with a harpoon and a plow/claw, meant to  drag other vehicles to a standstill ( Like the cars that shoot harpoons into the War Rig towards the end of Fury Road...). The other one will, no doubt, join my cavalcade of rat rods. I also found a VW van derived truck/trailer set that may become a second War Rig as well as a close to scale train set that will become terrain pieces.

I also managed to sneak away to my workshop for an afternoon and made a little progress on the rocky hills: 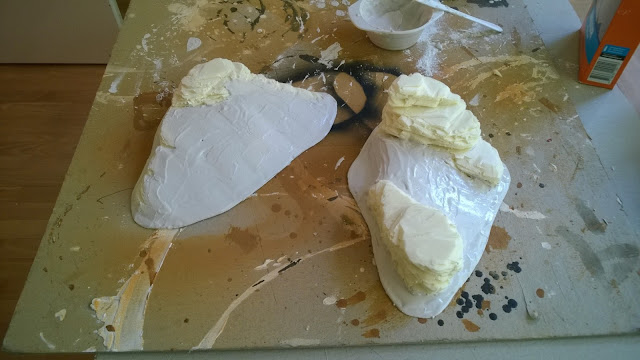 Once the filler has been sanded smooth, I can start adding sand and rocks, after that paint (sadly all outdoor jobs, and the weather is threatening to be abysmal this weekend...).

Plus, when I returned home yesterday, a new toy had been delivered and was waiting for me: 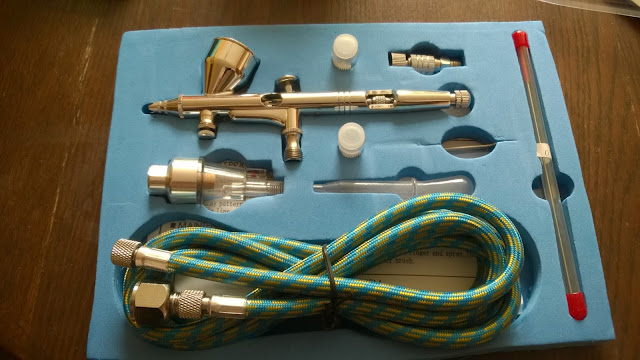 Which means I now have a syphon feed basecoater and workhorse for terrain and a dual action airbrush for more controlled excercises! It's an off-brand cheapo one, so I'll have to try it and find out how well it works. Nevertheless, I'm excited to have it.

And ofcourse, GW dropped a bombshell this past week: 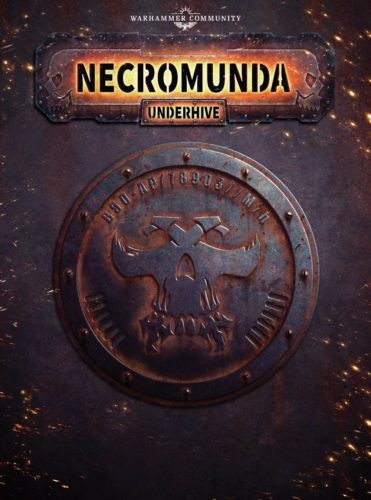 I loved Necromunda back in the day, and can't wait to get started again! I hope the game will live up to the expectations, but if not, it's new miniatures and old rules all the way... So I'm not too worried.
Several folks in the newly emerging gaming group (all old buddies who found each other and wargaming again after several years) have also expressed interest/enthusiasm, which gives good prospects to have some games and or a campaign or two. Happy days ahead!
What makes this a very fortuitous coincidence is that I've been dreaming and stockpiling materials to build Necromunda terrain for quite a while, and between the foamcutter and the airbrushes I finally have the tools to do a proper job of it.

I've been taking stock of what's on my plate hobbywise for the coming period and, with the recent revelation from GW, it breaks down to this:
-Gaslands: Build more cars and terrain. (The core set of this terrain can also do duty for WWII Afrika, which is good because:)
-Battlegroup: Follow along in Johan's painting challenge with my DAK (this does mean I have to complete two Recce choices before the end of August, I need to hurry!) and build some terrain, which again, will also serve for Gaslands.
-Warhammer 8th edition: I had planned to have a serious go of getting my Howling Griffons up and running, but that may get superceded by the imminent arrival of Necromunda (see below). If I need a palate cleanser from other projects, I can do some more work on the Death Guard part of the Dark Imperium set (the Primaris will be absorbed by my Howling Griffons).
-Necromunda!!! I intend to finish painting my Escher miniatures and build a nice, atmosperic set of terrain. Hopefully before/at the November release.

All this will be in addition to finding a new job (as my current project is about to end soon) and spending time on woodworking again, plus all the usual day to day stuff. This means you shouldn't expect lightning progress from me and I will need to find ways to use my hobby time more effectively. A.k.a. streamlining and de-cluttering things!

So, the coming months I've got plenty to do, hobby-wise! For the coming weekend the plans are to, if the weather permits, make some more progress on the Gaslands terrain and/or try out the new airbrush. If the weather is non-cooperative, I will be cleaning up and re-arranging the hobby den for all the construction and painting that lies ahead of me... If any time is left, I should get cracking on those Recce choices for Battlegroup before the deadline expires.

This blog may from occasionally feature content from Games Workshop, so this is in order:

This web site is completely unofficial and in no way endorsed by Games Workshop Limited.